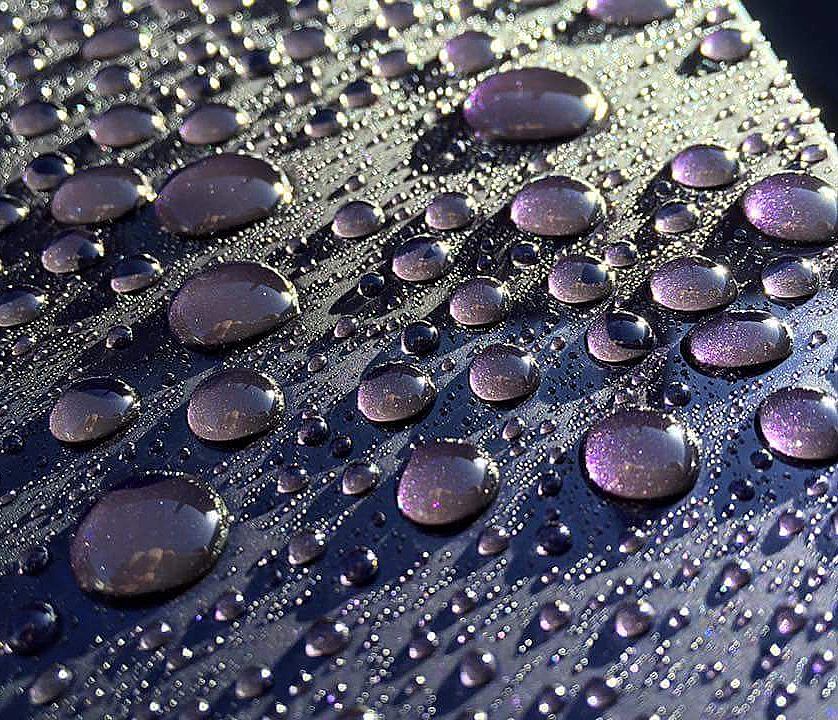 Water is a polar molecule, composed of two hydrogen atoms bonded to a single oxygen atom. Water molecules like to stick to one another, like small magnets. This is called COHESION. Water molecules also can be attracted to other substances, such as metal or dirt, especially if they have some static charge on them. This is called ADHESION. Lastly, some substances are not at all attracted to water, and even repel it. These include oils, fats and waxes; all of which are called non-polar substances.

When water falls on an unwaxed car, the forces of adhesion are almost as strong as the forces of cohesion, and the water spreads out. Furthermore, if the painted surface is not perfectly smooth, water can be channelled for some distance along tiny ridges and valleys. This is particularly true if there is dirt on the car. The dirt itself may be charged, and attract water even more. These tiny flaws may not be readily visible without a magnifying glass, but you can sense a rough surface when you run your hand over it. On such a rough surface, drops of water appear flat and wide and often uneven.

Preparing the surface with a Clay Cloth will render the surface incredibly smooth, something a car sponge or regular cloth just can't do, and therefore when a wax is applied properly to the smooth surface, the wax fills in any minor scratches, those visible and those not and layers the whole car. The chemical structure of the wax prevents water from penetrating to the surface of the car. Because the wax itself is hydrophobic (literally "fears water"), the forces of adhesion are much less than the forces of cohesion. So, water is more likely to stick to itself, and water beads up higher and rounder than on an unwaxed car.

Did you know? Carnauba wax sets as hard as concrete, is non-toxic, hypoallergenic and has a very high heat tolerance – around 85 degrees Celsius!

Carnauba wax is well known in detailing circles for the ‘lotus effect’ it produces, where water forms into beads and easily rolls off surfaces. This phenomenon often referred to as ‘beading’ is a caused by a high contact angle between the water droplet and the vehicles surface: the greater the angle, the more hydrophobic properties the wax exhibits.

So next time you look at your beading, have a look at the shape of the bead. Collinite produce a very good contact angle which demonstrates its supreme hydrophobic properties!